The pandemic may have postponed many events, but as they say, it’s better late than never. The recently concluded 2020 Tokyo Olympics may have been a year late, but it was still eventful despite the ongoing global health crisis.

Top athletes from all over the world gathered for two weeks in Japan to compete in several sporting events in hopes of winning that coveted Olympic gold medal for the nations they’re representing.

As victors stepped up on the podium, most people can’t help but notice the different reactions and demeanor of the medalists as they are awarded. The gold medalists are the ones beaming and full of pride and relief for their accomplishments. However, when we get to the silver and bronze medalists, it appears that the ones in third place are a lot happier compared to the ones who came in second.

For years psychologists and researchers have observed the difference between the reactions of silver and bronze medalists. Several studies were made, and conclusions were drawn. Based on initial observations, bronze medalists appear to be a lot happier. Although cordial enough to give out a smile, silver medalists can be seen as disappointed and unhappy with their accomplishments.

Both behaviors can be attributed to what they call counterfactual dreaming or thinking. This typically happens when people start to compare their present state or circumstance with what could have been. And this phenomenon doesn’t just happen to athletes. Regular folks also go through it from time to time.

For instance, achievers and perfectionists are most likely to respond negatively whenever their expectations are not met. In a workplace situation, one might have been assigned to ensure its cleanliness and everyone’s safety. That means needing office cleaning services. But things might not go their way if an obstacle prevents them from doing their duty.

Whenever their expectations aren’t met, they get disappointed and dismayed. In a situation like this, they still lost. They failed and missed their mark, and there’s nothing worse than that, even if they’re the second-best in the world. 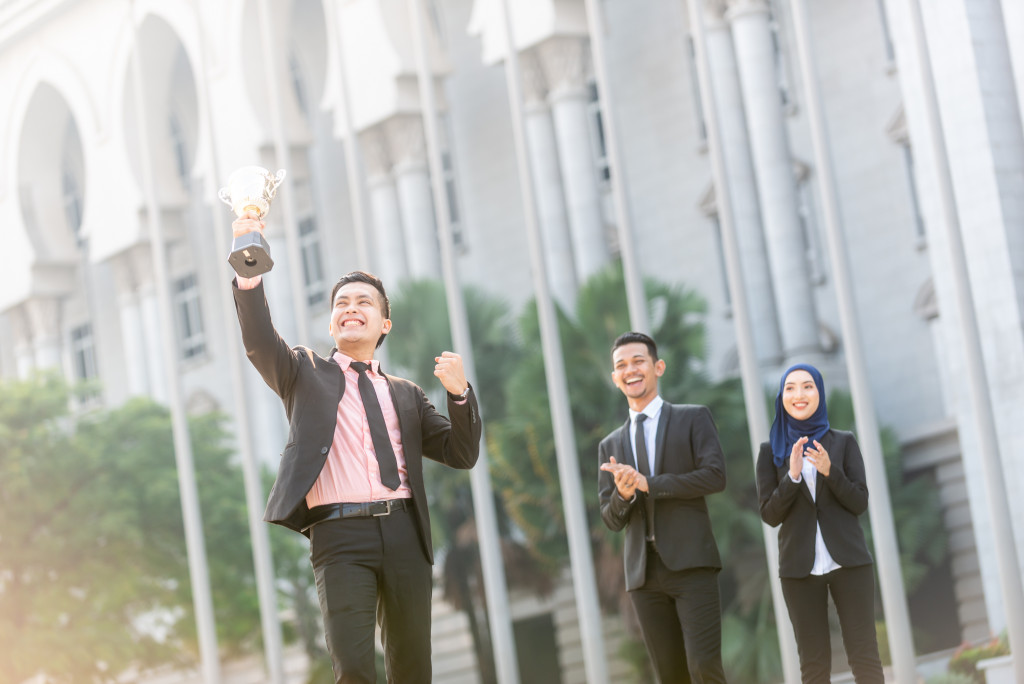 In contrast, those people who came in third and got the bronze medal appeared more excited and ecstatic. This is still a result of counterfactual thinking, but instead of focusing on what they failed to achieve, they remind themselves of what they achieved. There is a big difference.

To bronze medalists, they can’t believe they still made the cut and are genuinely happy to be included in the top three best athletes in their sport. This is why their smiles and joy are genuine. On several occasions, some of them even appear to be happier than the gold medallist. The fact that all their hard work didn’t go wasted, that they still brought honor to their country, and made their team proud, are enough reasons for them to be grateful. In their minds, at least they still made it.

The Attitude of Gratitude

It will boil down to having the proper perspective on things. Athletes who came in second focus on “I was this close to the gold,” while those who are next in line think, “Hey, I got a medal!”

The attitudes are different, which needs to be adjusted if we want to be happy in life. A grateful person who knows how to spot the blessings and good things amid life’s misfortunes is content. Contentment is not settling, but it does wonders for a person’s outlook and behavior.

One such example is Allyson Felix, an American track star who almost got the gold in the women’s 400-meter finals in the 2016 Rio Olympics. She was denied the gold by Bahamas-born Shaunae Miller, who dove towards the finish line to snatch the win.

This upset was painful for Felix, who later wrote on Facebook about her heartache only to be reminded of other reasons to be thankful. She made her loved ones proud, especially her coach, who was there with her from the start. She never gave up on her goals and dreams and became the most decorated USATF Olympian at the time. The realization of all the other good things surrounding her near-gold victory brought her back to her senses and gave her a grateful heart.

Similarly, as people, we will have our fair share of wins, losses, and near-gold misses. But having the proper perspective and looking at all the good things around us enable us to bounce back from defeat and go through life without experiencing depression.

In all circumstances, the right mindset and attitude — that of gratefulness and contentment — lead us to a better, more productive, and happier life. It prevents us from wallowing in misery and keeps us moving forward in our quest for bigger and grander things in life.

In our pursuit of bigger things, this gratefulness will keep us grounded and in tune with our inner spirit. As long as we daily reconnect with ourselves and do our best in all we do, whether you get gold, silver, bronze, or a participation prize, you will keep leveling up in life.