Science Fiction gives us ideas on what outer space or alien structures might look like. However, some of these structures can be seen all over the US, and all of them are out of this world.

Built for the 1962 World’s Fair, Seattle’s Space Needle stands as one of the city’s strangest structures. The 600-foot observation tower has the appearance of a UFO or alien spaceship, being held up by sleek support grids. The observation deck provides a magnificent view of the city’s skyline. Viewers can see marvelous views of the Olympic Mountain Range, Cascade Mountains, Mount Baker, Mount Rainier, Elliot Bay, and even the islands of Puget Sound. Underneath the observation deck is the Loupe, a revolving deck with a glass floor.

There used to be a restaurant on this level, but services were suspended a few years ago, although there are plans to bring it back. Tickets also allow access to Stratos VR, a photo-realistic bungee jump experience from the tower. Visitors are also provided with complimentary photos of their experience. More than 1.3 million visitors head to the Space Needle every year, so make sure to book your hotel early so that you won’t have to travel too far.

*San Antonio, Texas, has a similar tower, complete with a revolving deck called the Tower of the Americas. However, the tower lacks the space-like feel of the Space Needle and seems more industrial. 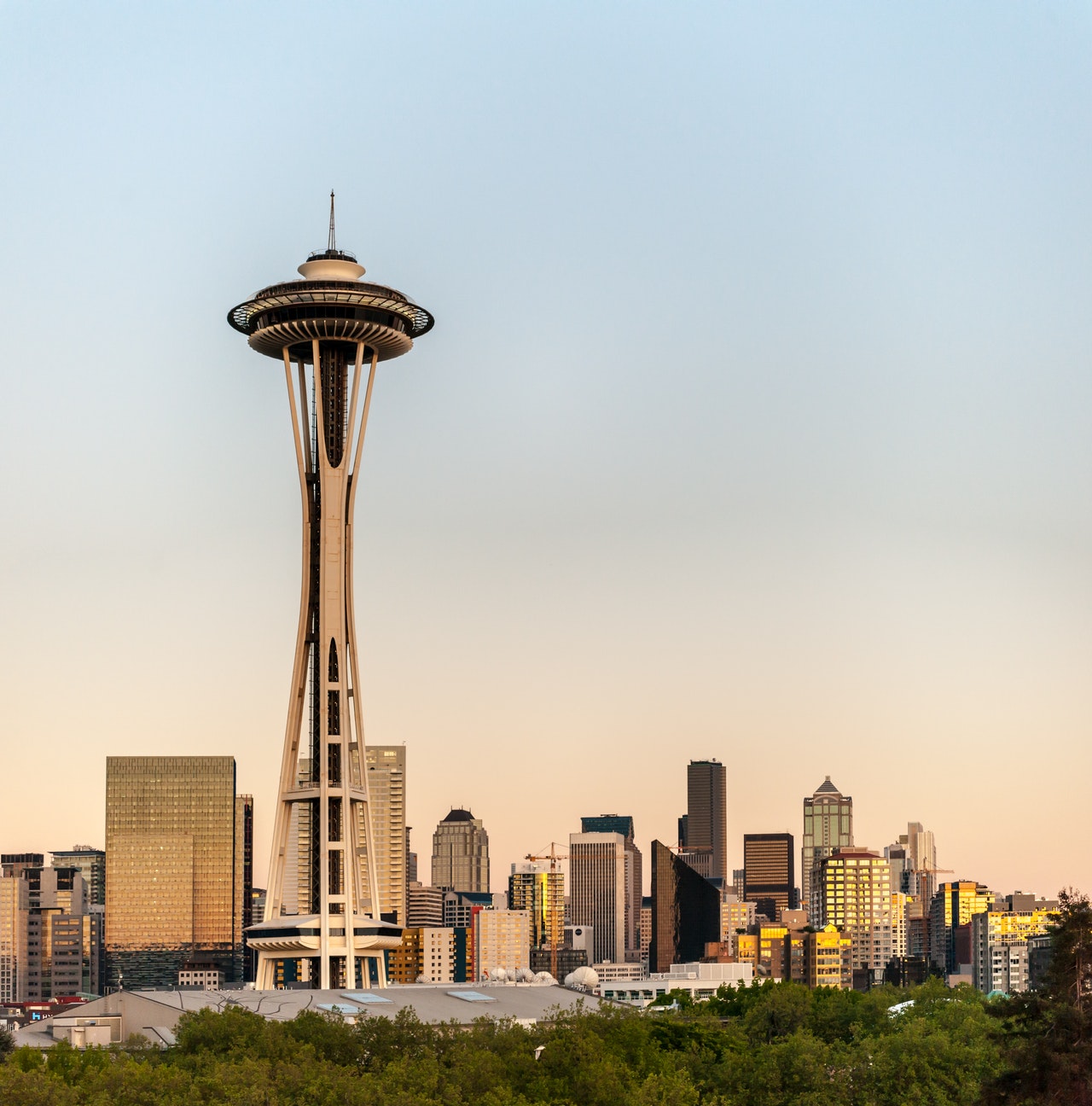 If you ever wonder how Elon Musk’s Mars colony might look, head to Missouri and visit the Climatron. The geocentric dome spans more than an acre in size, housing various ecosystems within. The Climatron has no support structures or pillars holding it up, relying solely on the strength of its geodesic dome structures. Most space-faring ventures integrate geodesic domes into their plans, particularly in future colonies or outposts on the moon or other planets. A

geodesic dome disperses stress throughout its structure, allowing it to withstand forces that would collapse normal buildings. While not exactly designed for space (or other planets), the Climatron does portray how colonies would survive by growing plants inside a closed environment. The dome houses more than 2,800 plant species, half of them from tropical countries.

Head to Colorado and visit one of the strangest places of worship you’ll ever find. The US Air Force Cadet Chapel’s unique design seems more suitable to an alien planet or a civilization more advanced than ours. The chapel is 280 feet long and 150 feet high. Its structure is composed of 100 identical tetrahedrons, giving it its alien-like design. The chapel houses several worship areas, particularly for Protestants, Catholics, Jews, Muslims, Buddhists, and worshipers of the Earth (Pagans, Wiccans, and Druids). The protestant chapel is particularly majestic.

With over 24,000 pieces of stained-glass lining the tetrahedral edges, the chapel feels both ethereal and “Sci-Fi-ish.” The pipe organ plays soothing music, which is hauntingly similar to the soft voices on Halo. The chapel is Colorado’s top human-made attraction, so expect more than a few visitors on your tour. Of course, a chapel is still a worship place, so maintaining a bit of decorum is essential.

At first glance, Los Angeles International Airport’s (LAX) Theme Building looks remarkably like Star Trek’s Deep Space Nine Station. Built in 1961, the Theme Building was supposed to house the terminal area and serve as the traffic hub for the airport. However, plans were scrubbed, and the viewing deck was transformed into a restaurant area. In 1997, Disney’s Imagineering team created a futuristic interior for the restaurant Encounters.

The Theme Building was quite popular in its days — however, the 911 attacks forced LAX to limit access to the viewing deck. Although the Theme Building is currently closed for visitors, LAX plans to build a hotel beside it, turning it into a conference center or another restaurant.

Another place to visit in 2021 is the George Lucas Museum of Narrative Art. Although not exactly Star Wars, the building is designed with an alien-like spaceship design. The museum will focus on visual storytelling and will include expansive galleries and state-of-the-art cinematic theaters. The museum is still in construction, but it is set to open by late 2021.

You don’t need to go off-world to see otherworldly structures. Several buildings in the US will fit nicely in a science fiction setting, but you’ll need a trip in the real world to visit them.